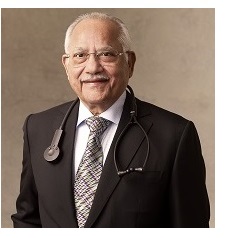 Dr.Prathap C Reddy, the visionary Founder Chairman of Apollo Hospitals, is widely credited as being the architect of modern Indian healthcare. He is best described as a compassionate humanitarian, who has dedicated his life to bringing world-class health care within the economic and geographic reach of millions of patients. The institution he built and the values and vision he inculcated led the private healthcare revolution that transformed the Indian healthcare landscape. It was Dr. Reddy’s vision to build a business model with an intrinsic ‘social conscience’. Apollo Hospitals opened its doors in 1983 and introduced international quality healthcare to India, at a cost that was a tenth of comparable costs in the Western world. This was Apollo’s first act of social responsibility and the Group has stayed true to Dr. Reddy’s vision in its journey of over three decades.

The business model designed by him was inherently scalable, replicable and sustainable and fostered the emergence of the healthcare sector in India, as we know it today. Dr. Reddy’s vision, acumen, and the ideal of uncompromised quality motivated numerous individuals in India and across the world to set forth, emulate the model and take care closer to their patients. Dr. Reddy has carried the torch of healthcare to distant corners of India. Always the visionary, he has harnessed technology and insurance to reach healthcare to the masses. The pioneering success of telemedicine and innovative insurance in Aragonda, the world’s first V-SAT enabled village in remote Seemandhra validates the concept of ‘Healthcare for All’.

Recognising that telemedicine can help meet the increasing demand for universal access to high-quality medicine, irrespective of geography, Dr. Reddy led his team to set up 125 telemedicine centers across seven countries. Dr. Reddy was at the helm of the revolutionary Reach Hospitals initiative from Apollo – taking world-class healthcare to tier II towns. This blueprint is carrying good health to the very heart of India.

A tireless advocate for creating access through insurance, Dr. Reddy firmly believes that mandatory health insurance is critical for the nation and has been actively campaigning for its implementation across the country. The innovative insurance project, at a cost of Rs.1 a day that he introduced in his native village decades ago, paved the way for many more products for rural India. This project has been adopted in multiple ways across the country and created the platform for the Government of India’s Universal Health Insurance programme for below-the-poverty-line population.

Nurturing change towards preventive healthcare, Dr.Prathap Reddy passionately propagated Preventive Healthcare with the concept of Annual Health Checks. As a cardiologist, he recognized that the battle against disease had to go beyond hospitals and envisioned the Billion Hearts Beating campaign, an endeavor that deploys innovative mediums to encourage Indians to stay heart-healthy.

In service to his nation, Dr. Reddy has also been the Chairman of the Confederation of Indian Industry’s National Health Council and advisor to its committees on Healthcare, Health Insurance, Public Health and Pharma.

Dr. Prathap C Reddy was pivotal in the genesis of NATHEALTH – the Healthcare Federation of India. He envisioned the creation of NATHEALTH as the collective and credible voice to shape Indian healthcare.

NATHEALTH is today emerging as one of the nation’s most powerful and influential forums in facilitating the shift in mindset, delivery, and policy-making to nurture the gift of good health for all in our country. It embodies the collaborative power of Indian healthcare stakeholders in their mission to address the urgent priorities and redefine the healthcare ecosystem of the nation.

A dedicated philanthropist, Dr. Reddy introduced social initiatives that helped transcend barriers and a notable example is the Save a Child’s Heart Initiative that is addressing the widespread issue of congenital heart disease in India.

Dr.Prathap C Reddy was conferred the ‘Padma Vibhushan’ the second highest civilian award. This unequaled commendation from the Government of India is an acknowledgment of his untiring pursuit for excellence in healthcare.