Influenza, commonly known as the flu, is a viral infection that affects the upper respiratory system of humans. The upper respiratory system consists of the nose, throat, bronchi and lungs. The symptoms of flu usually last for about a week and in most cases resolves on their own. In extreme cases, influenza can have complications and prove to be deadly. Influenza is not the same as stomach flu, which is caused by viral infections to the stomach. 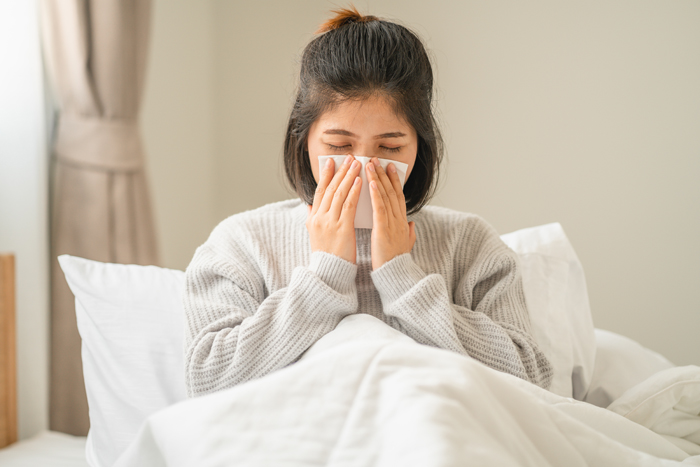 People at risk of contracting the flu are;

People in the most risk category can have severe complications related to some underlying diseases, such as pneumonia and in some cases even death. The best defence against influenza is to take an annual vaccination. Influenza rapidly spreads across the world in seasonal epidemics and proves to be costly with the burden of medical bills, loss of productivity and costs pertaining to other health-related diseases caused by flu.

According to WHO, close to 5-15% of the population are annually affected by the upper respiratory system problems caused by influenza.

The flu is caused by disease-carrying viruses. These viruses are categorized into three groups namely A, B and C. Annual influenza that affects a majority of the masses are caused by category A and B. Type C causes less severe symptoms. Influenza A has two subtypes A(H3N2) and A(H1N1) which are important from the perspective of humans. Influenza viruses consist of protein layers known as antigens. The genetic composition of influenza viruses is such that it undergoes frequent genetic modifications and that leads to antigenic drift. This antigenic drift drives the modifications in the annual influenza vaccines.

What are the Symptoms of Flu?

Common symptoms during the flu are:

Most of the people experiencing flu-like symptoms can treat themselves at home. In case the symptoms persist and cause great uneasiness, it is best to get the advice of a doctor. The doctor at Apollo Kondapur may prescribe you antiviral medications to ease the symptoms.

What are the Causes of Influenza?

Influenza viruses affect a person usually when the immune system is not working actively or in the case of severe medical conditions already prevalent. The flu virus is an extremely contagious virus and affects a person when they come in contact with an infectious person or thing.

The virus is transferred through the air in the form of droplets when an infectious person sneezes, coughs or talks. You may be infected with the flu virus while inhaling or while coming in contact with substances on which the droplets have fallen. This then gets transferred to your eyes, nose and mouth. Someone suffering from flu can be infectious before the symptoms develop until seven days afterwards.

The flu spreads mostly in crowded areas. Since there is a constant antigenic shift to the influenza viruses, it is highly likely that a person can get affected by the flu virus again and again. If the body encounters similar flu as the past, the antibodies prevalent in the body prevent the infection or reduce its severity. But the body cannot protect you from the constantly modified new influenza types.

Who are at a Risk of Influenza?

If the person is healthy and young, the effects of the flu virus are less severe. But high-risk people like young children and older adults can develop severe complications like pneumonia, ear infections, asthma flare-ups, bronchitis and heart problems.

How to Prevent the Flu?

It is highly recommended that people undertake annual flu vaccinations to prevent from attracting the virus. This is likely to protect against the 3 to 4 flu viruses that can spread during the year.

Although the vaccines are effective, yet it is highly recommended to take steps to reduce the spread of influenza viruses by regularly and thoroughly washing one’s hands, covering the mouth and nose while sneezing and avoiding crowded places during the peak flu seasons. Also if you contract the flu virus, it is requested to stay at home to avoid infecting others.

How to Take Care at Home During the Flu?

These measurements can assist to alleviate your symptoms while you have the flu. They are;

What is the Treatment for Flu?

In general, you will need rest and plenty of liquids to treat influenza. Your doctor may prescribe an antiviral or antibiotics for the treatment of flu but your doctor will prescribe antibiotics only if the influenza is accompanied by a bacterial infection.