A part of cataract surgery, an Intraocular lens (IOL) refers to an artificial lens that is used to replace the original lens of the eyes. IOL surgery is a part of surgery performed to fix cataracts. The eyes consist of a lens that is made up of water and clear protein that sits behind the pupil. With age, the proteins change and this change may lead to hazy or blurred vision by turning parts of the lens cloudy. This condition is known as a cataract. Cataracts can lead to blindness. The intraocular lens is used to correct vision. An intraocular lens (IOL) implant can be made out of silicon, plastic, or acrylic and holds the size of about a third of the dime. It is coated with a special material that helps to protect the eyes from harmful ultraviolet (UV) rays. 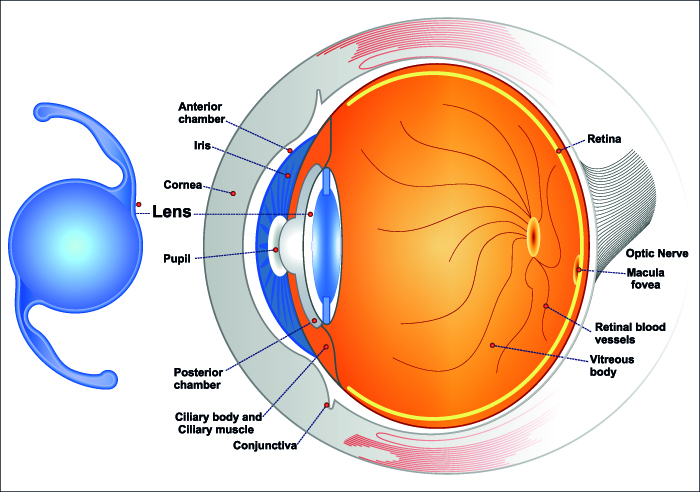 Intraocular lens (IOL) can be of different types:

When do you need an IOL surgery?

The signs that may indicate the need for IOL surgery are listed below:

If you observe the above symptoms, you must see a doctor.

How is the IOL surgery performed?

To initiate the process of IOL surgery, the ophthalmologist, a doctor who has specialized in eye problems and eye surgery, may measure your eyes to choose the right implant. He may refer you to certain medicated eye drops to use for a few days before the surgery takes place. The ophthalmologist may also prescribe certain medicines that are to be taken beforehand.

The different steps in the IOL surgery are listed as follows:

What measures should be taken after the surgery?

The certain measure should be taken to protect the operated eye:

What are the complications involved with IOL surgery?

Even though the complications involved in the IOL surgery are rare, a person may notice bleeding or catch an infection after the surgery. There are also certain risks like loss of vision, detached retina, dislocation, or after-cataract that are involved with the IOL surgery.

What measures you should take to maintain healthy eyesight?

Certain preventions can be maintained by an individual on his own to maintain healthy eyesight can be as follows:

1. Can an IOL once implanted be removed and replaced?

The IOL once implanted can be removed and replaced, even though a situation like this may come up rarely.

2. How to select the best type of IOL for implantation surgery?

The selection of the IOL type should be a decision made by the surgeon depending on the condition of the eye.

3. Is there a need to wear glasses after an IOL surgery?

Need to wear glasses after an IOL surgery depends on the accommodation of the implant. At a young age, the internal eye muscles change and control the shape and allocation of the natural eye lens, altering the power of the lens. Presbyopia, a natural and unavoidable process because of which everyone slowly loses the ability to accommodate the vision over time due to lowered lens flexibility. After the IOL surgery, the targeted focal length may not be achieved and this is when eyeglasses can be used for a more precise vision.

4. What problems can one face after the IOL surgery?

One can feel persistent inflammation, bleeding and swelling can take place around the affected eye, the eye may catch an infection, there may be changes in the eye pressure, one can also suffer from retinal detachment.